Here at StrandedSoft we have been talking a lot about art, programming, graphics, rendering techniques and the like for the last few months.  That’s great, but there is a very important aspect of gamedev that we have been neglecting a bit as well: music and sound.

Today, we are going to put and end to that. And we are going to do so by taking a quick-start tour on one of the great -yet, considerably obscure- music creation tools that we game developers have at our disposal. And yes, it is absolutely free.

PxTone is a simple but powerful set of music and audio sample creation tools. They were created by Daisuke Amaya, aka Pixel, the lone-wolf developer that brought us the marvelous Cave Story, and more recently, my beloved Kero Blaster (which just got updated for free!).

He wrote the PxTone tools and used it to create music for his games, but in the end PxTone turned out to be a very interesting and useful piece of software, and lots of people have been using it to create music in the years that have passed since its release. PxTone characterizes itself by its simplicity and easy to use interface. These qualities make it a good start point for newbie game developers who want to try and tackle by themselves the gargantuan task that supposes making their own music for their games.

PxTone is basically an arranger and tracker, that also allows you to generate your own noises and instruments (or as they are called here, “voices”). If you don’t use very large samples you can relatively small music files (around 50-100kB), which can be played through their own dll as ptcop files or exported to wav if you want to use them anywhere else.

At the moment (and it will probably stay that way), PxTone works on Windows only, and you can get it right here.

Once you get it you’ll notice how it is divided in a a bunch of smaller programs. This is because each one of them takes care of a single bit of the whole music creation process, they are the following:

ptVoice – allows you to build instruments (voices) to be used with ptCollage.

ptCollage – the main tracker program. This is where we will make most of our work.

Fire up ptCollage.exe. You’ll be welcomed by a quite sober and simple screen with a series of main buttons. I won’t go through all of them, but you can create and open up different projects (songs), as well as edit the sound quality of the output by using the Edit, Setting and etc buttons.

The Player button allows yo to, well, play stuff. You can play the whole thing, loop it or mute the track as you like. There is nothing much to it, really.

The Project button allows you to set your song name, as well as the tempo (Beat Tempo, or BPM), as well as how many beats you want to have for every measure. A “measure” is simply a block with a set length that contains a set of notes. You can set how many measures your song will have, which basically means how long you want your song to last.

Next up, we find the Effector button. In here you can set up to 4 types of delay effects and 2 types of overdrive effects.

Last, but not least, we find Copy Options, which basically allows you to set what information must be transferred when you copy a segment of your song and place it somewhere else.

With this done, we can check out the following tabs that can be found just below the upper row of buttons:

Here, you can load the different instruments that will be used on your song. Hit the + button and you’ll get a file explorer so you can set which .ptvoice file to use. You get a far amount of them with the basic pxTone zip file you downloaded, so choose whichever you like. Also, you can create your own voices using ptVoice. 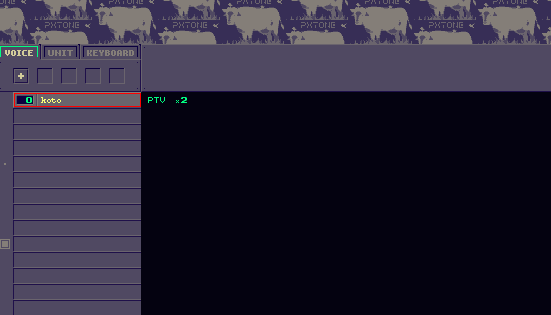 Units are voice tracks that use one monophonic instrument or noise. They hold the key sequence of notes that they will play during your song. You can edit them any way you want and during playback you can either play them all together or mute one specific unit in order to fine tune a specific track.

Use the red strip to set a start and ending to a part of the track, which is useful when you want to repeat some part of the song, like the main motive or theme.

The green strip is used to edit a specific part of the track, as well as copying or selecting it. 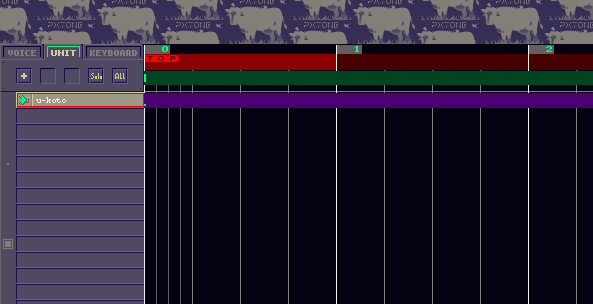 Finally, we get to the keyboard tab. Here, you can place individual notes for each unit to play. Use the pencil tool to write your notes. Also, since you probably are going to want to set your notes in relation to other notes playing on a different unit you can see more than one unit displayed on keyboard mode by selecting them with the CTRL button and then opening up the keyboard screen. 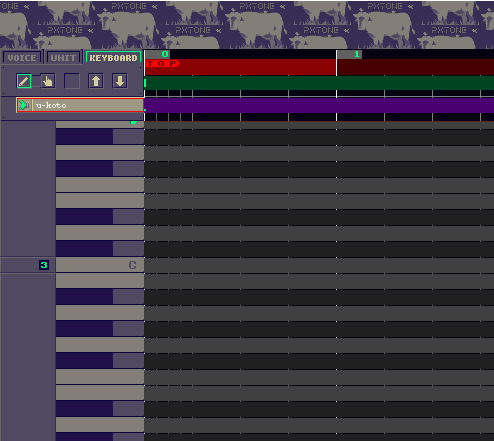 With these 3 tabs you can already start punching some notes in, playing them, adding some effects and try to get your track to sound the way you want. You can tune in even further with the resolution tool or with the volume panel located at the screen’s bottom.

This is really simple, once you are done you can just export your song as a *.pttune or as a *.wav. This way you can use them in your games in a straightforward way. Don’t forget to save your song as a *.ptcop file, or you won’t be able to further edit or modify it!

Is it really up to the task?

Ok, so now you somehow got the big picture of pxTone. You probably already played around a bit with it, but it will take a bit of practice, time and some musical genius for you to get a really good tune out of it. You may think that the tool itself is not really capable of portraying great music but oh boy will you be wrong. Since there is no way you are just going to take my word for it (you wise dog) I’ll leave some examples here and will let you decide. Crank up the volume and enjoy these, which of course, were all created with pxTone.

Enjoy!, and thanks a lot for reading!