Hey! You have 6 minutes? That’s what you need to see what’s going on here!

Boss has been lashing me restless for days because I forgot to mention one of the most important things about particle systems and effects in the first post of  my particle series: emitters! We’re fixing this right now! I don’t want to be punished for this error anymore T_T

Particle emitters! Because it is high time

In the first particle’s post I explained a bit about particles life, a basic particle engine design and how particle effects works for dummies, but I miss to explain where the particles comes from!

Every particle system has an emitter and there is where particles are born. Emitters can be a point, a plane or even a 3D object, and particles can be created at the edges, the vertices or even the faces of them. In a pure 2D scenario an emitter can have 1 or 2 dimensions (well, that’s obvious xD).

Once a particle has been created, always from some point at the emitter surface (or inside the emitter in 3D scenarios), it will move, jump, shine or whatever it’s meant for, then it’ll die after a while, at the same time more particles are being created at the emitter, ready to complete their tasks.

Tools to create something awesome

Creating the particle engine, each particle and their behavior was our first approach, but sometimes these kinds of effects can become more and more complicated. Fear nothing! There are lots of tools to make the process easier, like these:

For this example I’m using Blender to create some examples. It’s a powerful tool and it’s free!

For this first example, I’m creating a basic plane as emitter over the base floor of blender.

As first step, do a right click over the basic cube and push del button to remove it. Then, use the Add to create a Mesh->Plane and select the object button in the right panel to display the Transform options to set them as shown below.

Now there is a plane, and the next step is adding a material to it. Click in the material data while the plane is selected and click on the New button. Set the material type to halo with the following values:

The next step is similar, but now it’s time to add particles to the emitter. With the plane selected, click on the particle button on the right panel (properties panel), then on new, and set the following settings: 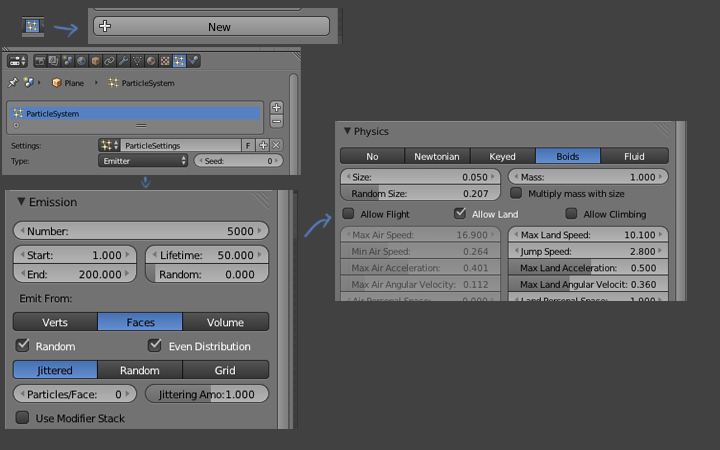 The next picture shows how this first example looks with my settings. Of course, you can play with all those settings to see how it works… even more, you should change and play with everything!

Now push ctrl+F12 to see how it actually looks.

Creating fire (or something similar in a few steps)

After the fastest crash course over particles in blender ever, I’m aiming to show how to create keyframes animation using blender, in this case with particles. At the bottom of the blender interface, by default, there is the timeline panel with every frame of the current project, which are selectable to see how actually looks at some point. With a frame selected, moving the mouse over a property at the properties panel (the right one by default) and pushing “i” key creates a new keyframe for that attribute at the selected frame. In other words, now the attribute can be changed at the selected frame and will interpolate from the starting value or other keyframes to create an animation.

Almost every attribute for every object can be animated like this, creating infinite possibilities to animate the particle system (or generally any blender object).

For the next one I’m using 3 keyframes at frames 0, 20, 100 for material alpha and size, giving high values for the frame 20 and lower values to frames 0 and 100. I’m adding texture to particle and a fluid physics with negative speed to let the particles move from the bottom to the upper side. This is the result of some experiments using the properties panel and a more complex emitter aiming for an effect similar to fire (well, I think is close enough XD)

Snowing over an angry cat

This is the end for now about particles. Play with all those tools out there! It’s so funny change an attribute and see how every particle moves like crazy suddenly, or how eventually it works and  the effect renders how you created it in your mind. That’s what I did for my last try; I feel happy about how it finally looks, but Boss doesn’t seems so amused

Thanks everyone who reached the end of this post. We’ll be very glad if someone find this of some use!

One thought on “Particles 2: Emitters and tools”