We all have memories from that specific game that made us throw the controller towards the screen a dozen times while crying out in anger. We hated it for making us fail again and again and yet, for some reason, we could not stop playing it. Its name might have been MegaMan, Castlevania or even Ninja Gaiden. It doesn’t matter. They all shared this common characteristic: they were hard as fuck.

But then, if they were so ruthless towards players, how come they are considered masterpieces of gaming?, why were they so fun?, how did they do it?, and more importantly, how can I, a wannabe game designer, can do it?

Well, I’m no expert, but I can give you a few tips on how to get on the right path in order to accomplish just that.

This is no exclusive from difficult games -in fact it’s a given for almost any kind of game- but it has more weight when you are building a challenging game. Your game can be a ruthless bastard that slashes players right from the start, but you can’t expect anyone to put up with your it if you don’t spend some time and effort teaching the players how your game is played and how its mechanics work. Even more, you have to do so in a somewhat safe environment.  You can’t just turn the difficulty gauge up to 110% right from the start without telling the players absolutely nothing about what is going on.

Of course, this does not mean that you should have a tutorial level right before the game begins, oh no, dear god no. What I mean is that you can teach players through gameplay, by putting them into controlled situations where a specific mechanic is bound to be used but where the consequences of failing to do so are not fatal (as they will be during the rest of the game). Of course the players will be playing the game and won’t think they are learning something directly, which is exactly what a good game designer should do.

Avoid the “this is unfair!” feeling

A common mistake you can run into when designing a difficult game can take place if players are playing your game and they are failing/dying/losing a lot (which is fine) but they always get the feeling that the game is cheating or that the way they died last time was cheap and unfair. There is no worse feeling for a gamer that to end up thinking that your efforts or ability don’t matter because the game cheats or tricks you in unfair or unpredictable ways.

To avoid this you have to make your game consistent. Set your rules and stick to them all the way. Don’t just change them out of the blue without telling the player. And if you do, be sure to make this change obvious so that players get the feel that they were warned but they failed because they weren’t prepared. This is good because in fact it will make them more eager to restart the game and try again.

Your game can be difficult and demanding, but it has to beatable. We talked about teaching the player the rules of your game and doing so through gameplay. One way to deal with these two at the same time is by rewarding the players who try new things, or who instead of trying to accomplish something doing the same thing time after time they try and explore some other paths.

For example, you can make one boss that at first might seem overwhelming, unstoppable and invincible, but that on a second approach has a fatal weak spot, that is exploitable by the player who manages to find it. This encourages the player to find the “faults” of the game, getting a feel of accomplishment and reward that just keeps them motivated and wanting to come back for more. That kind of joy is what makes difficult games so great. 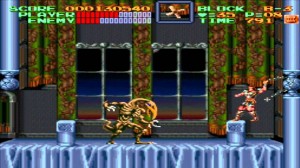 This Super Castlevania IV boss always used to kick my ass until I realized I just could crouch to dodge its attacks.

Building with trial and error in mind

Some difficult games tend to base their design on a series of challenges that require skill and memory to be beaten. This will probably mean that a whole lot of playtime is going to be spent on a trial and error process as the player attempts to beat the stage. This is fine, and some great games make use of this design but only the good ones take an important fact into account: repeating things you already did is frustrating and can only be acceptable to a certain extent. For this, if your game is going to be based around this design you want to make it the easiest for the player, so don’t waste their time making they repeat a long way after each attempt to beat a level. 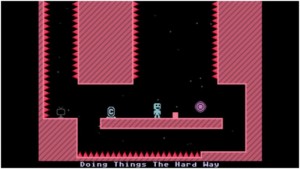 Again, VVVVVV is a great example of trial and error design done right.

I’ve been playing and replaying a few difficult games lately, and it is amazing how they always manage to get me coming back for more, even when I just spend my time failing and dying repeatedly. This kind of games have something that calls out to our self-improvement sense, that just leaves us wanting for more and looking forward to our next attempt, which -in our minds-  will be our definitive shot at it and when we will finally beat that thing for once.

And now, I’m back to my game. This time that boss is totally getting it.

Thanks for reading, see you soon!