Hi everyone! Today it’s time to end with the Unity3D canvas series with one last post. In this one we are using basic ray casting to trigger some more animations in our player interface.

If you want to try the following tutorial by yourself here is the last step project from where you can continue whit this one:

If you wonder if you are able to build it from zero, here is the “almost complete” list of chapters of this Unity3d canvas series where you can find the entire process:

We need to detect if the monolith is in front of the player, so first of all we need to detect somehow which object is in his front. There are other ways, like using vectors and angles, but in this case I’ve chosen ray casting because it’s powerful, easy to use and already built in in Unity.

Let’s start creating a new script and adding it as a component to the physical object of the player.  Unity’s built in first person controller it’s a composition of a camera and a graphic object. In this case I’m adding this new script to the camera because its size is equal to the game screen, and this way it’s easy to create a ray from the center of the screen. Here the ray length is limited to 20, so the monolith will be detected only if the player is near it.

Here is the code:

Notice that in the code we are looking for an object named “monolith”. That’s because I renamed the monolith 3D model in such way. If the name of the object you are looking for it’s not the correct one, the ray will hit it, but the code will do nothing.

If everything is fine, each time you point the player view to the monolith while in game, you will have a message in Unity’s console like this one:

Now the monolith has been detected, but there is only a console message when it happens. It needs some good looking animation to tell the player what’s going on.

Before going back to Unity, I created some new assets for the detection effect. Here I’m not using sprite sheets since we can create animations based in basic transformations inside unity, and for this time that’s more than enough.

Next steps are the same we have seen in some old tutorials:

Check this post to find out more about Unity3D animations.

That’s how it look after placing the assets

We have a code that says when the player is pointing to the monolith and a cool animation. Time to put all together!

In the animator tab, create an empty state by right click-> create state->empty. This will be our “idle” state. In my case I have an init state for additional screen initialization effects when the game starts. 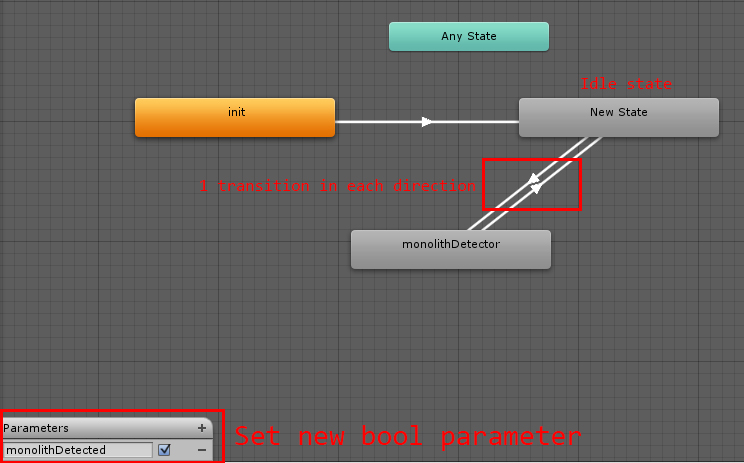 state diagram and parameter set up

Finally, the Boolean parameter needs to be set to true or false somewhere. Go back to the script created in the first step and add the following lines:

You can test the result HERE , move with AWSD and jump with space. Go right from the starting position to meet the mighty monolith!

Next time I’m leaving Unity for some time, maybe moving back again to pixelart tutorials and tools and graphic assets in general.

One thought on “Basic raycasting in Unity3D”